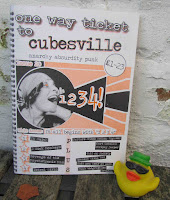 or Paypal as gift: cubesville[at]hotmail[dot]com
Posted by cubesville at 22:59 116 comments:

Hear punk legend TV Smith on his new book, The Alternative Top 50, as featured in the next exciting installment of One Way Ticket to Cubesville!!

Posted by cubesville at 22:52 No comments: 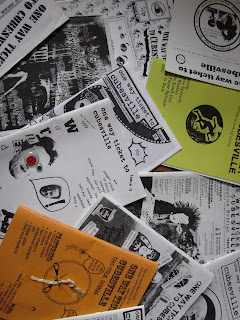 Having emptied out the zinefair box, I discovered back issues that were previously sold out!!

Consequently, there are loads of back issues available at the Punx site's Cubesville shop.

Browse Punx for gigs in your area, get zines, read them on the bus. Bang-on!

Posted by cubesville at 15:00 No comments:

Buy now! The Vegan's Guide to People Arguing with Vegans 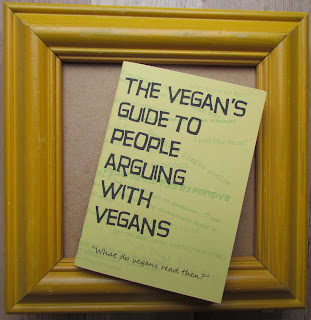 Available now - the publication that turned arguing with vegans on its head.

"People new to veganism may initially be surprised by the cornucopia of codswallop said about what is, after all, a constructive, compassionate lifestyle choice.

"As they soon discover, ignorance knows no borders, and the crassness, callousness and empty-headed nonsense in this collection is just the tip of the iceberg.

"This invaluable, interactive guide collects together some of the worst arguments against veganism to give you a flavour of what to expect from non-vegans.

"Enjoy the sheer absurdity of people arguing with vegans!"

The Vegan's Guide to People Arguing with Vegans

This is so HOT I'm storing it in the fridge. The Vegan's Guide to People Arguing with Vegans went to Footprint Printers this morning. Simultaneously essential and absurd, get this 36-page pocketbook should be in every vegan's bathroom. Expect it in the next couple of weeks. 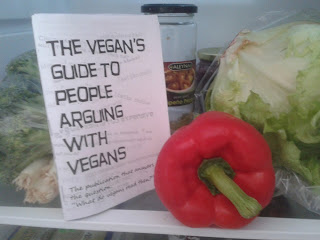 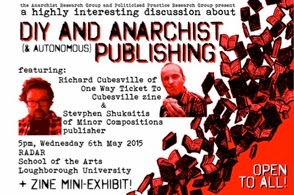 This is the nearest I get to my own gig poster.

Thanks to the people at Loughborough University for staying awake, especially Politics, History and International Relations department and School of the Arts.
Posted by cubesville at 15:35 No comments: 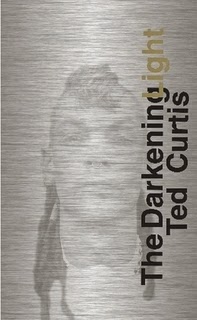 Here's a review of Ted Curtis' book The Darkening Light from the latest Cubesville fanzine.

You wanna buy Cubesville #17? Get it through the Paypal buttons to the left... "

This is the best UK punk zine of nowadays." Active Distribution

It is 1986, two years after Crass have called it a day, and the anarchopunk scene feels like it's falling apart. Heavy metal has ransacked punk like a muscle-bound Viking invader and Crass Utopianism is as murky as the homebrewed lager drunk by The Darkening Light's main protagonist, Frank. In the transition between anarchopunk and UKHC, Frank and his friends tumble into their huntsab group's Sherpa van to journey between Wiltshire and Wood Green for an all-day squat gig featuring Antisect, Atavistic and Heresy. Ted Curtis's writing captures the mood of dislocation and isolation and the tuppence ha'penny hedonism of homebrew and glue as Frank fumbles for answers in a contradictory scene whose protagonists wrap its rules around their own awkward personalities. The anarchopunk preoccupation with veganism chokes in the blue haze of rollup smoke and is muted behind the pandemonium and horror stories that fly around the gig.
As much as The Darkening Light could be a story about DIY culture at its most abrasive, it serves as a prelude to alcoholism and mental health issues. Indeed, its frankness could provide answers to many an Alcoholics Anonymous meeting, anger management workshop or cognitive behavioural therapy session.
Ian Glasper's account of the late 1980s UKHC movement, Trapped in a Scene, was possibly the first book that attempted to catalogue this subculture whose authenticity lay in its own obscurity. In an otherwise comprehensive study, Mr Glasper's interviews, band profiles and discographies catalogue the music scene of the time, but struggle to capture the mood. Curtis's worm's eye view peers, totally sozzled, between the fissures of fact and fiction to produce a piece of subculture writing that ranks with the best.

Here's an extract from the latest One Way Ticket to Cubesville:

From obscure 1930s Sci-fi publications to Riot Grrl zines and photo collages, Salford Zine Library houses a weird and wonderful collection of self-made publications... And what is the Blue Peter connection...?

Inside Salford Zine Library by Cubesville on Mixcloud
Posted by cubesville at 12:51 No comments:

Colin Jerwood interviewed for Under the Pavement radio show before Conflict played at the Star and Garter, Manchester, on 6 Oct 2012.


Conflict interview 6/10/12 by Cubesville on Mixcloud
Posted by cubesville at 14:23 No comments:

Interview with The Shend of the Cravats

Here's an interview conducted a month or two back during the Rebellion festival. What better venue to talk about anarchy and absurdity than Blackpool's answer to the Hollywood Boulevard, the Comedy Carpet. Brought to you in glorious stereo and hungover technicolour. 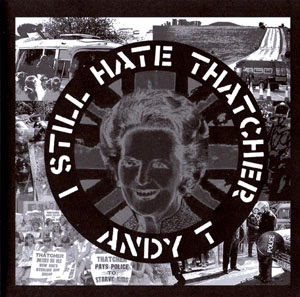 Andy T has released his first record in more than 30 years as a follow-up to his legendary recording on Crass Records.

As angry and uncompromising as ever, the full title of Andy's single is "I Still Fucking Hate Thatcher" and is counterbalanced perfectly with "Sing a Happy Song", playing on 33rpm and 45rpm respectively.

Andy's single on Crass Records, Weary of the Flesh, is considered a champion of DaDaist punk. For this project, he is backed by a band featuring members of State of Urgency and the Crow People. Collectively they sound something between Joy Division and PIL with Andy's angry poetry over the top

Oh yes, Cubesville #12 is hot off the press bringing you essential anarchist bathroom reading. This issue is a special retrospective on the future featuring all the usual mayhem, described by Negative Reaction as "Bugs n Drugs without the cartoons".

This issue we talk about utopia and dystopia with people who dare to dream including: perennial punk poet Attila the Stockbroker, Polish legends Dezerter and Mancunian armageddonists the Blacklight Mutants.

We take the vegan tardis to the end of the universe and bring you cut out and keep action figures courtesy of Warrington punx Hated till Proven.

At 32 A5 pages it rests snugly beside anyone's toilet.

Featuring Steve Ignorant, Accidente and the story behind the Dead Kennedys' biography. Plus make your own pogo punk puppets!!

cubesville
Anarcho-absurdist fanzine gracing the bathrooms of global punks since 1987. Co-presenting Under the Pavement every week across South and Central Manchester.

Under the Pavement radio show

Bringing you Anarchy on the Airwaves every Thursday 11pm to 1am